I set the alarm for 0630 in order to have breakfast at 0700, when it opened. I made my way to the main road to wait the bus to Nadi airport which was scheduled to go past at 0810. It arrived more or less on time.

On the way, we made a couple of unscheduled stops for a few passengers who had upset tummies. One stop was at a random home on the highway and another at a hotel.

We got to Nadi airport about 3.5h later on time. I tried to check-in for my standby reservation back to Auckland [Auckland-travel-guide-1139106]. The airline processed all my details and I was fortunate enough to get my boarding pass an hour before departure.

Airside was a mess as the airport was undergoing substantial remodelling. There wasn't enough seating space and it wasn't helped that there were a few delays, including ours for about 25 minutes. Despite that, we landed in Auckland on time.

It has been a short but highly rewarding trip. I didn't expect to pack three awesome experiences into the space of a week. And all this awesomeness is relatively close to home in Auckland.

I finally had good enough weather in Pacific Harbour [Pacific-Harbour-travel-guide-1349861] to lie by the pool and enjoy the resort's facilities. It gave me a chance to get out of the dorm room as well. I did have two dips in the pool and it was freezing. The sea, with the churned up sand wasn't appealing enough. 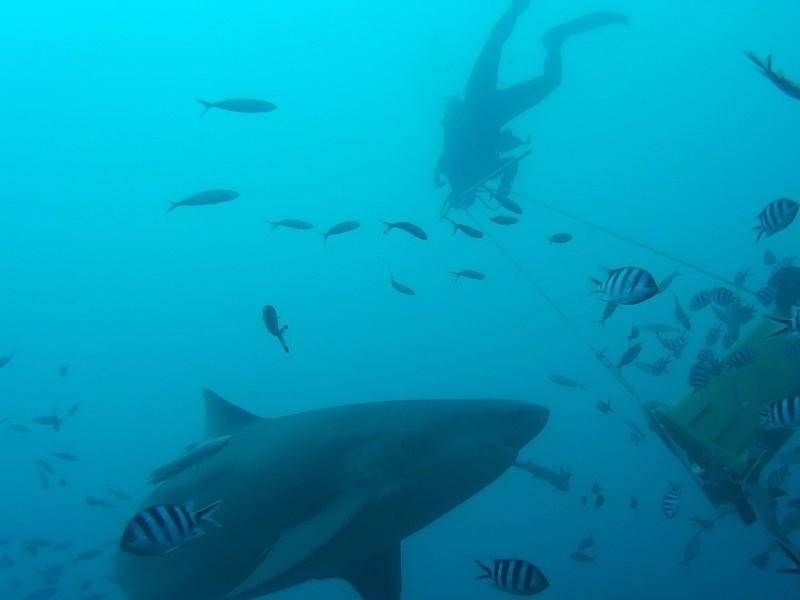 The sharks really do come up close!
I woke at 0400 to go to the toilet. It was blowing a gale and I could hear it howl through the dorm. I had trouble getting back to sleep. By 0500, I could hear the birdsong and cicadas; I realised that was because the wind had died down. When the alarm rang at 0620, the wind had picked up again. I had this sick feeling that the shark dive wasn’t going to happen.This was something I had wanted to do for so long and made a detour to Fiji in order to make it happen.

The buffet breakfast started at 0700 with pickup for our shark dived at 0730. I checked with reception and there had been no word of a cancellation. The transport arrived just slightly after 0730 for our short drive to the dive centre.

We got our gear fitted and hopped into Predator (with Hunter being the other boat). 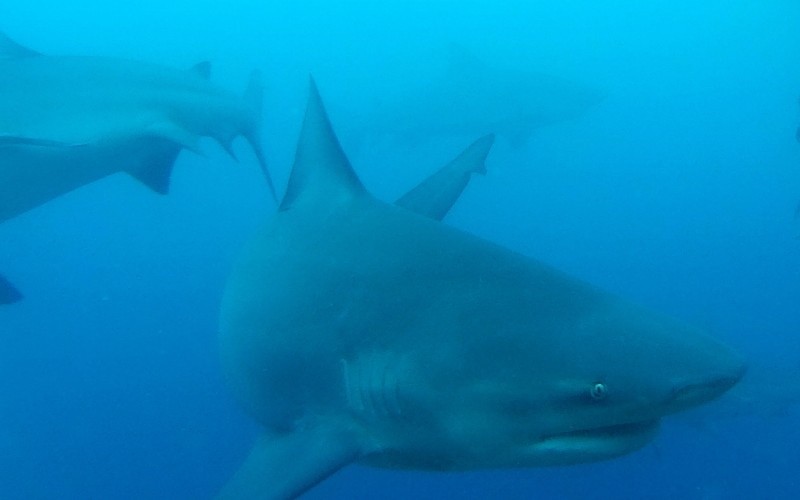 The sharks really do come up close!There were about 10 divers and 4 dive staff (mix of feeder, shark chaperone and dive master roles) and the skipper. Chugging down the river slowly was smooth. The fun began once we headed out to sea; it was rough! It was about a 15 minute churn through the open sea to the dive site at Shark Reef Marine Reserve.

The first dive, we descended straight down to 30m where we knelt behind a low coral wall for about 15 mins to watch the bull sharks being fed from a bin. The graceful creatures swam round and round and nudged the bin waiting for their feed. The bin was operated by ropes, somewhat like a puppet on strings. Depending on the tilt, it may open to let out a piece of tuna head.

It’s not too different from a cat or dog a meal time. Strangely, it wasn’t scary even though they are so close. 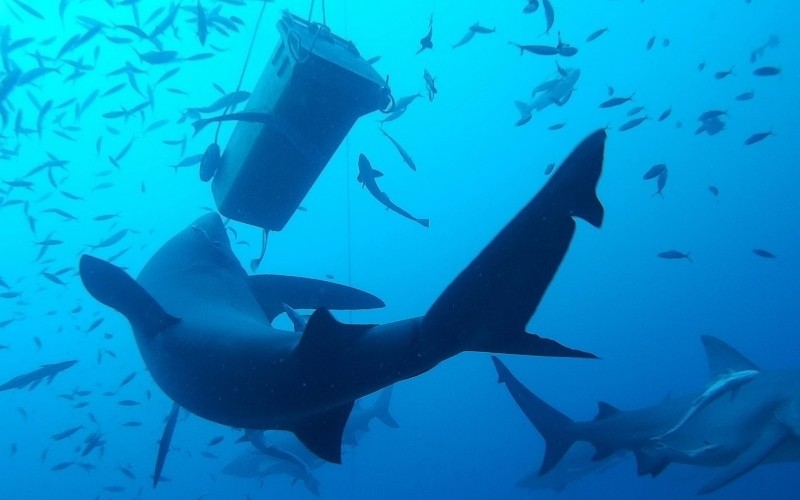 The sharks really do come up close!I had to duck a few times as they glided past my head! It was mildly thrilling but the overwhelming emotion was one of awe!
We then came up to 15m and knelt to watch reef sharks (grey, black tip and white tip) being fed. Again, this lasted for about 15 mins. This wasn’t so good for me as my view was obscured by small reef fish.

The second dive, we descended down to 15m for 30 minutes to watch more bull sharks being fed tuna heads from the puppeted bin. This wasn’t too different from the first dive. But the “extra” this dive was the hand-feeding of the bull sharks. It was pretty unreal seeing the tuna head being let go by the feeder just in time to go into the mouth of the passing shark. I couldn’t get enough of those hand-fed moments. 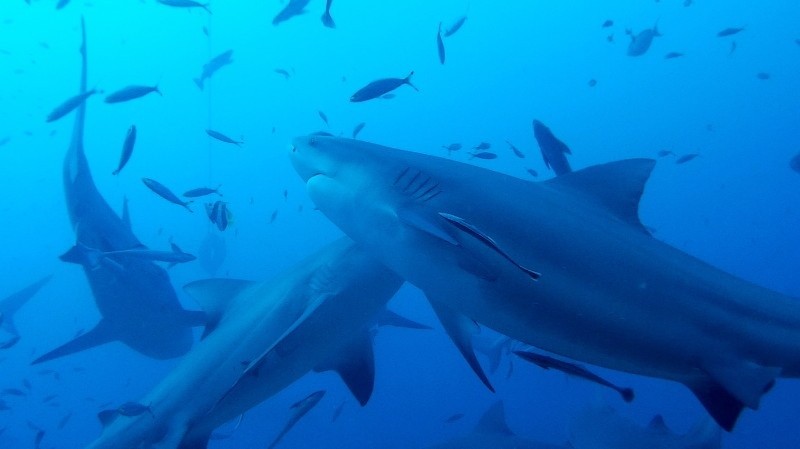 The sharks really do come up close!

Coming back up, a number of us headed towards the wrong boat. The divemasters were good at picking that up (considering they can’t see our faces well) and ushered us back into the right direction.

For both dives, we had to enter the water and hold on to a current line floating in the choppy seas, wait for everyone to be in the water before descending. And for getting out, we held on to the current line once we surfaced and patiently waited our turn before climbing up the ladder.

It was an experience so awesome, it was beyond words. The fact that it was “staged” or a “performance” didn’t make it less awesome. I’ve always considered myself to be a spoilt diver having done Sipadan several times. Having experienced this makes me even more spoilt than ever.

It was a good way to end my Vanuatu/Fiji adventure. I was so close to have this dive being pulled out under my feet due to bad weather. I don’t know how I managed to squeeze three such awesome experiences into the space of a week. 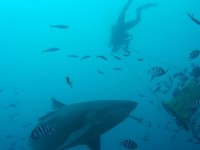 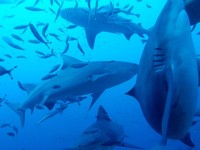 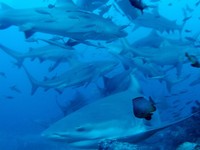 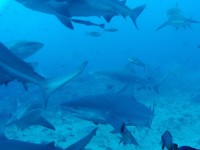 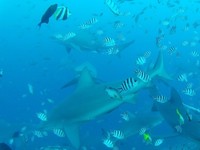 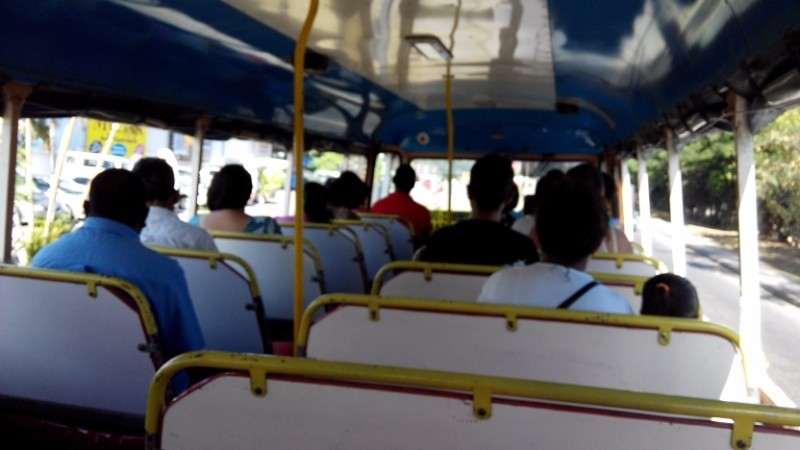 I love the open-sided Fijian buses.
I woke early with the sun and dozed still around 0830 due to the 1h time change. I took breakfast in the hotel. It was fairly priced if one pays for it in advance at the front-desk; it seems strange considering it involves extra work for staff and the customers.

I took the bus to Nadi [Nadi-travel-guide-960483] to change my money and had a quick look around. The placed had grown in the 20 or so years since I had last been. I ended up getting FJD4 more than what I would have got at the best place at the airport, less FJD1.40 for the return bus fare! But it got me out for a look-see since the hotel pool was closed till after 1100 for cleaning.

The Coral Sun Express service from Nadi Airport to Suva collected me at 1315, after setting off from the airport at 1300. This was my cheap FJD20 ride to the Uprising Resort (dormitory section), so I didn’t expect them to collect me from the hotel.

Leaving Nadi, I couldn’t help noticing the blue skies and the parched landscape. Quite a change from Vanuatu! Around the Coral Coast area, the landscape changed to lush green and the skies cloudy. 3h30 later, I was dropped at Uprising junction, leading to my home for three days.

The dormitory was quite OK but the resort facilities very nice. Sadly the weather was bad here, with strong winds stirring up lots of waves which churned up the sand. It wasn’t warm enough to swim in the pool either. This seems like deja vu; just like the days I had in Vanuatu.

Killing time before flying to Fiji 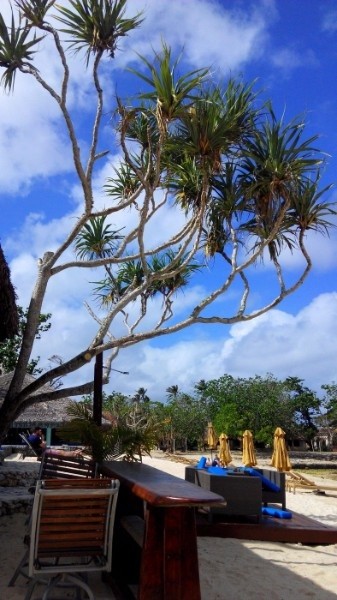 Killing time at Breaka's Resort, Port Vila before flying to Nadi, Fiji.
Making the most of the day

I wish the weather would make up its mind so I could make up mine. It flicked between sunny, dark-cloudy and windy, prompting me to flick between staying in or going out to the beach. I had the day to kill before my 1700 flight to Nadi [Nadi-travel-guide-960483], Fiji.

I had decided to stay in when Becca knocked on my door, having checked out from her place. I gave up my room soon after. There was a break in the weather and we decided to go to Iririki Resort about 3 minutes across the water from town. Our hotel manager rang and found that the pool wasn’t operational and their beach was tiny. He suggested Breakas instead.

We took the van there, bought a drink and used the pool as the tide was right out (again). The pool was quite nice, but still, not much nicer than ours. 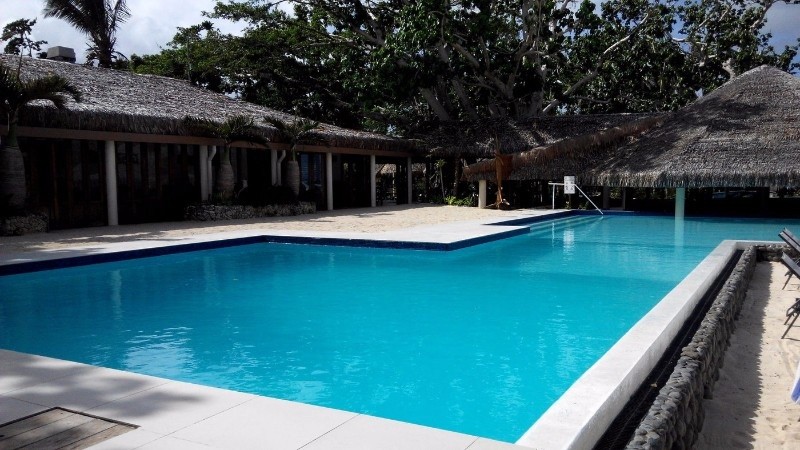 Killing time at Breaka's Resort, Port Vila before flying to Nadi, Fiji. Pool was chilly!The water was chilly but we took the plunged as we had made the effort of coming out here and buying a drink; not something we would have done in our own pool.

We left about 1330 back to town for a lunch at the Seaview burger bar by the water. Becca ordered the fishcake which turned out to be a heavy ginormous lump of partly smashed (rather than mashed) potatoes with bits of fish in it, then deep fried lightly. As it was so big, there was very little surface for the volume. It was the best value item anywhere at only VUV100, so I bought one to take on the flight.

We got back to the hotel with enough time for me to freshen up and say goodbye to Rich and Andrew before vanning to the airport for check-in at 1500, some 2h prior to the flight. All the formalities were done in a jiffy, but they strictly enforced the requirement for an onward ticket out of Fiji. 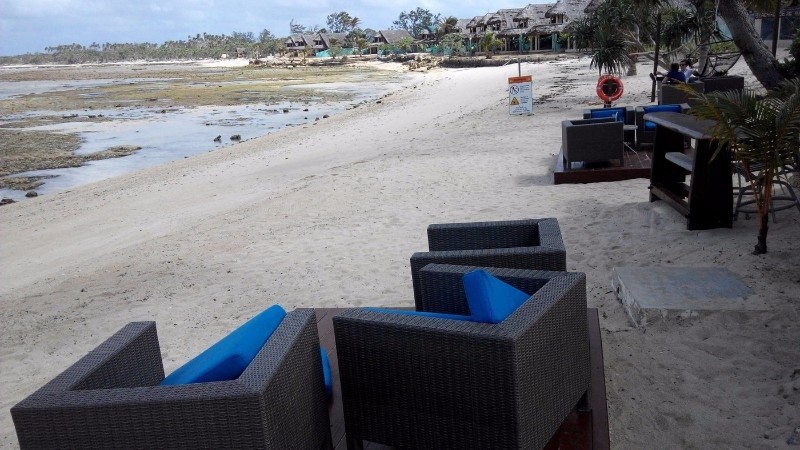 Killing time at Breaka's Resort, Port Vila before flying to Nadi, Fiji. Low-tide isn't a good time to swim here.The flight wasn’t about half-full and probably two-thirds of the passengers were mainland Chinese.

By visiting Port Vila, I had unintentionally been to every single international destination on the Air New Zealand’s currently scheduled network. I felt that I had best the best-kept-secret for last as Port Vila offers handy access to unique adventures not seen elsewhere, eg. Tanna volcano and Land-diving.

1. Unique sights and adventures.
2. Cheap and easy public transport around Port Vila; hail a shared van and they take you anywhere for a low price, adjusting their route to please everyone on board.
3. Reading pidgin signage and trying to work it out in English.
4. Friendly locals who don’t charge you a special tourist price.

1. Good beaches aren’t found ubiquitously.
2. While locals don’t charge you a special tourist price, the price of most tourist services are high. This is no different from other Pacific countries. I call it “third world with first world pricing”. I reckon it is the proximity to their main markets, NZ and Oz. There isn’t a steady stream of customers from neighbouring and less wealthy countries as you’d find in Asia.
3. The best sights are geographically diverse and require costly domestic flights.

Fiji Link’s ATR72-600 had arrived early. Consequently we departed and arrived about 30 minutes too. Immigration queue wasn’t the shortest and the luggage came out from the wrong carousel.

Coming out, I tried to change my Vanuatu Vatu of VUV10400 to FJD, which was worth FJD200 based on the median/wholesale rate. I was quiet shocked to have ANZ offer me FJD143 and Western Union FJD167. I did find that FJD167 was the norm in Nadi town; some places were worse but the best I got as Proud’s Duty Free which gave me FJD171.

The Fiji rip-off pricing has started already. Wifi at both my upcoming hotels aren’t free. And I know it will not end till my return flight home because the departure tax (prepaid) is about NZD160.

My hotel the Nomad’s Skylodge aka Tanoa Skylodge was more run down than the spruced up pictures. Due to a mixup, they put me in a cheaper room than I had booked and charged me less. The room is a big normal hotel room that had been partitioned into 3 cubicles, and they call it a dormitory. All was good except they aircon stopped working and I had to shift.